In the world-class amphitheatres of the Douro Valley, the man gave birth to port wine and high-quality table wines.
The port is Portugal's oldest ambassador. Cultivated on the terraces of the Douro, its vineyards have the honor of belonging to one of the oldest demarcated regions in the world, dating back to the creation, in 1756, of the Alto Douro General Company of Viticulture. Its mission was to delimit the region, register the vineyards and classify the wines according to their quality.
It is also the birthplace of the Douro table wines, which have acquired, in recent decades, a high notoriety and projection abroad, thanks to their quality, as well as for the red wines, the whites and even the rosés.
Inseparable from the Douro River which runs through deep valleys, from the Spanish border to the outskirts of Porto, this region of shale mountains, with poor and agrest soil, has been transformed by the work of the man who lives there. planted the tiered vine. Greens in summer, the color of fire in autumn, these vineyards gave birth to a unique landscape, classified by UNESCO.

Arrival at the airport of Porto, reception by an English representative of Liger.
Lunch in a typical restaurant of Porto.
Departure to Amarante. The presence of the great mountain of Marão which from Amarante begins to rise in majestic landscapes and the Tâmega River, the largest tributary of the Douro. The bridge of Amarante perpetuates the memory of the heroic resistance of the population against the Napoleonic forces which, at the beginning of the 19th century invaded Portugal.
Stop for tasting of the famous pastries of the city "papos de anjo", "brisas do Tâmega", "toucinho do céu", "bolos de São Gonçalo", "galhofas" ", passing through the historic center to picturesque houses with elegant decorations .
Continuation to Telões, where for the visit of Caves da Cerca, specialized exploitation in the aging of the water of life (tasting included).
Continue to Vila Real, capital city of the province of Trás-Os-Montes. Vila Real rises 427 meters on a promontory that forms a peninsula between the Corgo and Cabril rivers, and on which stands its graceful houses with many stones bearing arms that ennoble their facades and the coat of arms of the city, engraved with a sword and a staff, summarizes the story of his first count. Beautiful and soothing city, where the look is lost in the mountains that surround it, you will discover the "medieval Vila Real", continuing by the "Old Vila Real".
Installation in a hotel **** or Quinta da Portela within 50 hectares of vineyards.
Dinner in a typical restaurant of the city, "Terra de Montanha".
Accommodation at your hotel.

Breakfast and departure to discover the Palace of Mateus, built during the first half of the eighteenth century, according to the plans of Nicolau Nasoni, the Palace Mateus surrounded by beautiful gardens inserted in a vast property is considered one of the greatest powers of the civil architecture of Baroque in Portugal.
Continue to Peso da Regua, considered the commercial capital of the Douro Valley.
Discover the Quinta do Vallado, producer of white wines, red Douro and Porto, tasting and visit.
Lunch at Quinta do Crasto in Sabrosa. On the menu, several treasures of Portuguese gastronomy.
Visit the Quinta, which will unveil its vineyards and processes for making the famous red wines of the Douro, white wines and Porto.
Back to your hotel.
Dinner at the restaurant "Museu Dos Presuntos".
Accommodation at your hotel or in case of accommodation at Quinta da Portela, visit of the vineyards and typical dinner with tasting of red and white wine of Douro.

Breakfast and departure to Lamego.
Discovery of the Raposeira Caves where the best sparkling wines of the region are produced (classic method of production identical to the Champenoise) with tasting included.
Continuation to Penafiel, of very ancient origin, it is said that in the region there were two castles, one of the name Aguiar de Sousa and another known as the Castle da Pena. When the Moors occupied the region they tried to invade the region, but they did not succeed because the castle was heroically defended. It is for this reason that it was considered "gall" (faithful), to be known as the castle of Penafiel, a name that encompassed the rest of the region.
Small stroll in the historic center of Penafiel and lunch in a local restaurant, (Vindouro restaurant).
In the afternoon, visit the famous "Quinta da Aveleda", specialist area in the production of "green" wine and its beautiful gardens with tasting.
At the end of the day visit to Santa Maria de Lamas one of the oldest manufactures of cork (Manufacture Amorim).
Arrival in Porto, installation in a hotel **** in the historic area of ​​the city.
Dinner in a typical restaurant of the "Ribeira" (Chez Lapin), multicolored district nestled between the cliffs or pile up buildings of another age and the majestic river Douro.
Accommodation at your hotel.

Breakfast and departure in direction of Braga, "Bracara Augusta", former Roman legal seat, built in 27 BC.
Visit the Sanctuary "Bom Jesus de Braga", The grand staircase that leads to the summit consists of 17 stages decorated with symbolic fountains, allegorical statues and other Baroque decorations devoted to several themes: The Sacred Way, the Five Senses, the Virtues, the Parvis of Moses and, at the top, the eight biblical figures who participated in the Condemnation of Jesus.
Continuation with the visit of the cathedral, the oldest of the country, was the biggest religious reference of Portugal along the centuries.
Departure to Guimarães.
For the Portuguese, Guimarães has a very special symbolic value, it was in a field near the walls of his castle that D. Afonso Henriques winner at the Battle of S. Mamede, on June 24, 1128, against the troops of D. Teresa, his mother and daughter of Afonso VI of Castile and Leon, initiated the course that would lead to the construction of the kingdom of Portugal, of which he would be the first king. Lunch in a typical local restaurant "O Florencio".
Discovery of the castle and the famous Duques Palace, followed by the historic area full of historical reminiscences, which preserved its heritage and its public spaces for the pleasure of its visitors.
Back to your hotel.
Dinner in a typical restaurant in the center of Porto "o Escondidinho".
Accommodation at your hotel.

Breakfast.
Visit of a store specializing in the marketing of red, white, sparkling wines and various spirits,
Garrafeira do tio Pepe https://garrafeiratiopepe.pt/

Continuation Vila do Conde, a peaceful town that grew in importance and prosperity as a shipyard at the time of the Discoveries. The sea has always influenced the life of the population of this locality and inspired the motifs of the famous bobbin lace, here produced at least since the seventeenth century. The techniques and the knowledge were later diffused on the rest of the Portuguese coast and even in Galicia.
Continue to Matosinhos, located at the mouth of the river Leça and privileged by the proximity of the sea, pleasant beach of the coast, currently the main fishing port of the country.
Lunch at the seafront at the Restaurant "A Proa", on the menu the famous rice seafood in the Portuguese.
Transfer to Porto airport, assistance with boarding formalities.
End of our services.

INCLUDED IN THE PROGRAM:
- Accommodation in hotels ****.
- Full board with beverages from J1 lunch to J6 lunch.
- Lunches in typical local restaurants with cafes included.
- Accompanying guide and tour coach from J1 to J6.
- The entries of the monuments indicated:
• Palace of Mateus,
• Stock Exchange Palace,
• Palace of the Dukes,
• Mini-cruise on the Douro,
• Tastings in Porto,
• Tours and tastings at Quinta do Vallado, Quinta da Raposeira, Quinta da Aveleda, Caves da Cerca,
• 1 Lunch and visit at Quinta do Crasto,
• 1 festive dinner "Herança Magna",
• 2 dinners in typical Porto restaurants
• 2 dinners in typical restaurants of Vila Real,
• Visit of a factory of corks,
• The taxes. 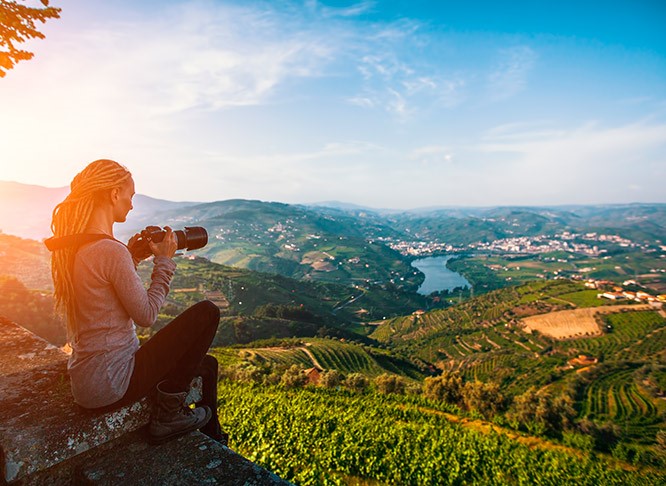 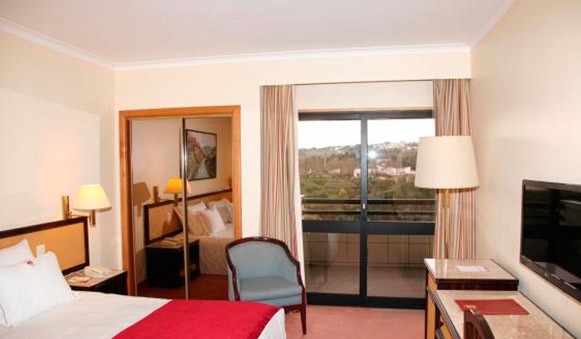 Hotel Mira Corgo is located in a privileged area of Vila Real, right in the heart of the historical and commercial center of the city. On the other hand, its location also allows you to admire the magnificent landscapes of transmontanas, such as the magnificent escarpments of the Corgo River, with a wide variety of birds.
The Hotel Mira Corgo offers 166 rooms (22 suites), meeting and conference rooms, panoramic restaurant, swimming pool (seasonal), solarium, private garage, free Internet at the hotel 100/100, television in all rooms with 90 channels, disco.
Finally, everything to make your business or leisure stay as pleasant as possible. 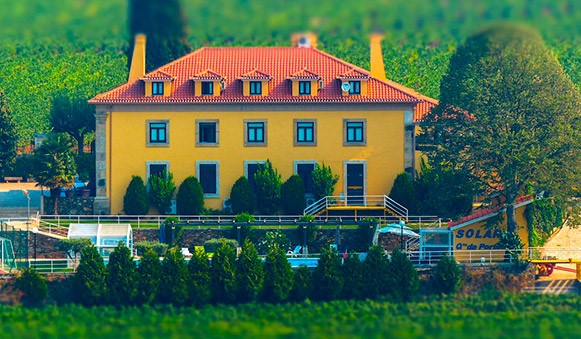 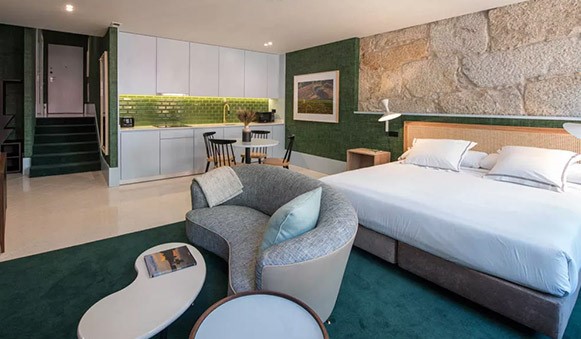